Author
Scott J. Hunter is the author of two books of poetry, The Meeting of the Traveler and the Magus, and Sledgehammer Poetry. After spending twenty years addicted to LSD, marijuana, and alcohol, he discovered recovery in the AA and NA programs. Replacing substance abuse with landscaping and ultrarunning, he owned Philosophical Gardening, a boutique landscape company, for thirty years until he retired. Ultrarunning became his avocation. In 2000, Scott became the 138th runner to complete the Grand Slam of Ultrarunning, four 100-mile races, Western States 100-Mile Endurance Run, Vermont 100 Endurance Run, Leadville Trail 100 Run: The Race Across the Sky, and Wasatch Front 100 Mile Endurance Run in a ten-week period. Scott’s ability to survive and recover from his addiction, as well as his achievements as an ultrarunner, is a testament to his determination. He’s become an inspiration to many. His current work, a memoir entitled AND THE MONKEY LETS GO, published by Mascot Books, relates an amazing journey fueled with psychedelics, pot, and drink that led to two spiritual awakenings, one when he attended his first AA meeting and the second when he solved the koan given to him fifteen years earlier by a Buddhist monk in Thailand. Following those awakenings, Scott describes the discovery of the causes of his addictions and the accomplished life he now leads. 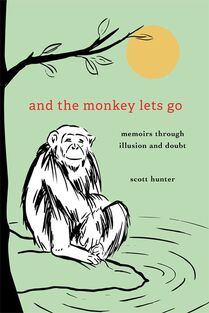 And the Monkey Lets Go: Memoirs Through Illusion and Doubt

Drug-addled and college-educated, Scott set off from Amherst College in 1967 to find the meaning of life. On a journey that took him from a Christian seminary to Thailand, from an antiquated state school for developmentally challenged children to hitchhiking throughout the U.S., from living in a teepee to homelessness, Scott discovered drugs, poetry, politics, and many interesting characters—but not happiness, joy, or inner peace. Twenty years later, when his travels finally brought him to AA and NA, long-distance running, and philosophical gardening, he discovered insights that helped him understand his own demons.

"Has a book ever come into your life exactly when you needed it?
(And the Monkey Lets Go might be the one—get your copy here.)
​I find many books haunting, but one, The Supreme Sign, may actually be haunted."